I wrote a story for an end of the year flash competition but it was rejected very quickly. Instead of sitting on this until next year and trying to hawk it then, I’m sharing it here. As you read this, I’ll be warm and cosy in the house that inspired the story, talking to the families I borrowed for the characters and, occasionally, looking out the kitchen window to the lake below. It’s covered in snow because the below is a work of fiction, not a true story.

Aurora Borealis under the Snow

“It’s happening, it’s happening!” Sara’s youngest was jumping up and down on the bench in the kitchen and pointing at the lake. Sara ran to the window and I followed her, leaving our post-dinner coffee behind. The lake at the bottom of the valley glowed green, a pulsing, dancing light strong enough to penetrate the snow. It looked like aurora borealis under the snow.

“Quick,” Sara said, “outside – you get a better view there.”

We grabbed our coats and piled outside, forming a tight group for warmth, the kids in front, chewing their mittens, our husbands at the back. All over the village people were coming out to watch. 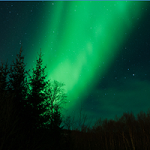 The glow from the lake grew brighter as the ice and snow melted. It turned a paler green, then a buttery yellow. It was a cold evening and the air glittered with snowflakes, like tiny hovering prisms. It was thanks to them we could see the beam of light from the lake that lit up the sky. We gasped in unison, hugging tighter together in awe. Over a minute or two, the light turned white.

I got my phone out to photograph it but Sara gently grabbed my arm and shook her head.

In the dark sky something large reflected the light back at the lake. Then the beam faded to green and was gone. The glow we’d seen at ground level was mirrored by intense Northern lights in the sky. When I looked back at the lake it was black and covered in a thin mist.

Sara didn’t answer. We went back inside where Sara made new coffee and brought out the fancy chocolates. Everyone was back in the holiday spirit, as excited as when we unwrapped presents two days ago. It was the first time we spent Christmas with my sister’s family. It felt right to be with them in the village that our grandparents left so many years ago.

“I’m so pleased you got to see that!” Sara said and tipped a tot of whisky into my coffee. “It doesn’t happen every year.”

“We don’t either, not really. But isn’t it beautiful?”

“Yes, but what’s in the lake. And what was that in the sky?” I shivered remembering the round shape I’d thought I’d seen.

“Our own little miracle. It’s been happening for generations.”

“And yet, you have a picture of it in your living-room.” Sara smiled.

I stared at her blankly. And then I remembered my grandmother’s cross-stitch sampler, a traditional piece of craft she made when she was seven. It had the alphabet across the top and numbers across the bottom. In the middle, what I had thought was a Christmas star shone with lime-green light onto a black lake between snowy hills turned ivory with age. I’d always loved that image, but never understood it. Now I did.