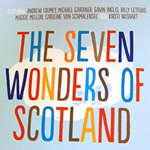 There’s something very special about pre-proofs, the printed (or PDF) examples of what your text looks like laid out and formatted as it will be in the book. It gives me a thrill of excitement, every time. I write my stories in Scrivener, and the output usually looks quite ugly. Standard manuscript format is double-spaced and uses Courier, not the prettiest of typefaces.

But when the text is typeset, with margins, page numbers, my name on the first page, a proper font: golly, the text looks gorgeous. Amazingly, it reads better too. It is a pleasure to read through the words, find characters or punctuation that’s gone wonky and return corrections.

There’s something even better than proofs: the finished book. That’s the most beautiful thing in the world.

I just looked at the proofs for Birlinn’s collection The Seven Wonders of Scotland, out later this year. It looks lovely. (The stories are rather good too.)