Look at this, isn’t it pretty? 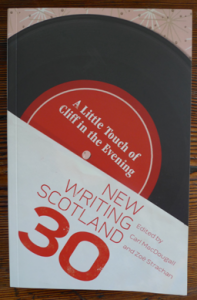 The table of content is rather attractive too. It’s got Lin Anderson, Alasdair Gray, Andrew Greig and Agnes Owens, as well as two of my writer’s group colleagues, R.A. Martens and Carol Farrelly. The stories I’ve read so far have been great. It’s an interesting mixture of poetry, short stories and even a comic.

The collection is available from Amazon now. (You can even read a bit of my story online: just click Look inside and then my name for a teaser page.)

The official launch is at Blackwells, from 18:00 on August 28th. Come along!