I finished Camp NaNoWriMo! But what does that mean?

END_OF_DOCUMENT_TOKEN_TO_BE_REPLACED

Last year was rubbish for me. I met none of my creative goals but floundered around in a fug of worry and self-doubt. (A lot of life happened.) Not a helpful state. Something needed to change. So…

Recently I attended a workshop on setting creative goals given by writer, journalist and writing coach Kaite Welsh. The purpose was to learn how to set goals and start putting some in place.

END_OF_DOCUMENT_TOKEN_TO_BE_REPLACED

So I finished a novel: it took ages. Mountains rose and were worn down to pebbles.

Before I had finished project 1 properly, I started project 2, the sequel to project 1. That one I planned – unlike the first – so when I came back to it after a hiatus of 12+ months, having diverted myself with the completely unrelated joys of project 3, I had chapter notes and plot progressions that told me where I was going. That’s what we call a good thing: I don’t remember details like plot, characters and the point of it all between novel-writing sessions.

Over the last couple of months, ever since completing project 1, I’ve been working hard on the sequel. Three days ago, I reached a crucial milestone: I completed the toilet-paper draft. In my process, that’s the draft before the first draft: something that shows the bones of the story, and has a whole bunch of colour and cheerful exchanges but usually in the wrong places. The toilet-paper draft is plump with enthusiasm but thin on anything else, including grammar. It’s too rough to share.

Now, it needs to rest.

END_OF_DOCUMENT_TOKEN_TO_BE_REPLACED

There comes a point when someone has to read your writing. I’ve been working on my current project for what feels like a very long time without finishing it. It was in a drawer for over 18 months and I wasn’t sure I’d ever look at it again. Having read it, thought about it, solved a number of issues in my head and edited it, I’ve reached an impasse. There’s no point in polishing this thing more until someone reads it.

So three days ago I gave it to my first reader. Yesterday, he started reading. Today, he finished.

We were both really worried that he wouldn’t. Not everyone likes everything you write, not even your partner. But that doesn’t mean that it wouldn’t be sad, difficult even, if C. didn’t like my novel at least a little bit. The fact that he did is a huge relief and makes me a little giddy. We had a long chat about the story over lunch. There are things I need to look at, issues small and large, but nothing insurmountable. Now I’m editing again, feeling more enthusiastic about this project than I have in… days. I have a heap of notes, some of them on Kindle, some of them on paper, and a plan for working through them. Draft number three is close.

There’s a real chance that this novel will be in a state where I feel able to send it out at some not too distant point. Fingers crossed. (This is the stage where superstition helps.) 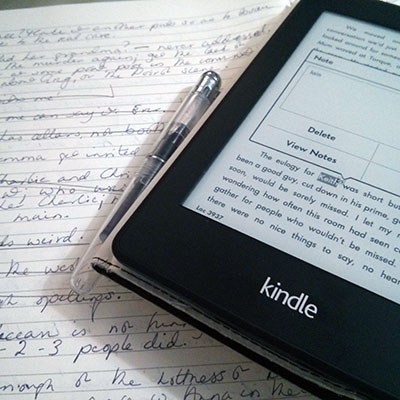 Deadlines are very helpful. They motivate me to get things done. That is, if they’re external. Deadlines I set for myself – ones that I can miss without anyone noticing – I find it difficult to hit. When the only one looking over my shoulder is me, I don’t honour the agreement. This is a problem when you’re trying to finish a novel no one has asked for.

Last year,  I set a September deadline for finishing my current project. I missed it, that’s how well that went. I had very good reasons for missing it, of course: stuff happened, and then there was that thing. But stuff always happens. Every year is a landslide of stuff, this year is no different.

So, I decided to set myself another deadline and stick to it, come hell or high water.

It’s a tight deadline. Challenging. I set it on Monday, and this is what I’ve agreed with myself: By the end of this week, I will have finished the toilet-paper draft of the current project.

It’s not going to be easy, but I’ve got all I need to succeed: a fresh new note book, pens, a list of scenes I’ve forgotten to write, a map of where I’m going. I have time. It’s not that far to go. By Sunday, it’ll be done.

My hand hurts from writing. It’s a nice feeling.

This is sound writing advice: finish.

As an aspiring writer, you hear it a lot. The logic is sound. If you don’t finish a project, you can’t send it anywhere. Taking the logic to its extreme, you should never give up in the middle of something but always soldier on though and make sure you get to the end.

I showed my writer’s group a short story that I’d been working on. I knew it wasn’t entirely coherent and I knew why. It started as a short idea, something that could be covered in 1,500 words, say. But the story grew and veered off in a different, winding direction. I needed advice: should I cut it right back (at the time, it was 7,500 words long) or should I keep going?

Writer’s group said keep going. That was what I wanted to do, so did it was easy advice to follow.

As a result, I’ve left my other projects unfinished. At first, I felt bad about doing that, but then a friend of mine pointed out that no one is waiting for them to be finished. There is no deadline, no agent or publisher anxious to see my work, so I might as well focus on what I am most interested in at the moment. Wise words.

It will be interesting to see if I get sidetracked on to something else before this one’s finished too. I hope not – that would be too much like a pattern and would force me to conclude that I’m rubbish at finishing.

It feels as if I’ve not achieved anything this year because I haven’t met my goals. In fact, I’m nowhere near my goals in terms of publication* and short story production.  This, I’ve come to realise, can happen when you work on a novel. It’s a big job and one that’s tricky to fit in around a full-time day job. There’s not that much time for short stories and other bits and pieces. Last year, I measured progress in completed short stories; this year, I count words. It might not be a great approach.

I started the year with 68K words and a mess of a manuscript. I now have 98K words and a manuscript that is two-thirds through the first edit. (That’s the edit that turns the thing into a first draft, something people are allowed to read.) I should be pleased that there’s progress but I wanted the first draft complete by the end of last year, so I just feel seriously behind schedule. I’ve been talking to my writer friends about my sense of frustration and my incomprehension that I haven’t finished the thing yet. How can it take this long? It’s not that complicated a story.

Of course, I know exactly why progress is so slow. It’s two things: firstly, I’m not working on it every waking minute. Part of me thinks I should, part of me knows that would be madness.

Secondly, I still have thinking to do. There are holes in my understanding of the world I’m building and until I plug those, there are problems I can’t solve. I think I should have had it all figured out ages ago and it pisses me off that I didn’t. But there you go. I didn’t know what I didn’t know until the problems presented themselves.

I’m practicing cutting myself some slack. It makes it much easier to just get on with it. Still, this was not the year of glorious achievement I had hoped for. It’s a good thing another one’s around the corner.

* I wanted to get four stories published, but got two: In Woodsmore Village was in the Scotman in January; Jack, the second, super-short story, was published earlier this month.

I’m short of materials and ideas, so I decided to write a short story a day for the first seven days of this month. We’re on day four. How is it going?

It’s going great but not in the way I expected it to.

No, I haven’t written three short stories and I won’t write one tonight either. But I have written three scenes for my novel and a short story that is a prequel to the novel, about one of the supporting characters. I sat down to come up with new ideas and my brain started galloping around my magical universe, looking out different characters’ eyes, weaving in new threads and setting things up for the sequel. It’d be dumb to fight it.

It’s been difficult to get the last bit figured out and written. For a while, I thought I had lost interest in this set of characters, this entire story. It would seem I haven’t.

I can always write short stories next week.

Or the week after.

I had a plan for this year. It wasn’t hugely ambitious, but it wasn’t laid-back either. It was a good plan, an achievable plan with enough challenge in it that I’d feel pleased with my self at the end of the year.

Somewhere about April, the plan went off the rails and there’s no way I’ll get back on track now. Things happened that took me away from writing, I completely lost my focus and now I’m sitting here, looking at the plan and sighing deeply. I don’t want to concede defeat, but if I don’t, I’ll be pissed off for the rest of the year as I try to catch up and fail.

So I drew up a new plan:

And that’s it. I’ll continue to send things out, and I’m attending a one-day writing course later this year, but apart from that, all I have to do to be OK with myself for this year are four little things.

Last year I achieved five of seven goals. This year, I’ve changed my goals a little and some of last year’s goals, sending a story out at least five times before retiring it for example, is now just part of the process. Likewise, I now assume that if I write a story, I’ll send it somewhere, so writing ten stories implies submitting ten stories. I’ve realised that it’s not realistic to write one per month – some months I don’t write – but ten over the year should be doable, even if I’m working on a novel.

This is what I’d like to achieve this year:

I know what I need to do and it can be summed up like this: write, submit and read. Business as usual, then.

* Two of which already have working titles: Jonah’s Story and Fingers in the Dirt. Watch this space as they get written.
** The first one of these, The Foods of Lara’s Loves, is looking for a market.
*** One for each performance.